Quarks are completely confined within protons and neutrons: a phenomenon that we do not completely understand. The artist's view below represents the two interlinked phenomena that drive confinement: the long-range correlations in the physical vacuum that surround the proton and excludes the color-field emanating from quarks and the extremely strong gluon-fields between the quarks.

To make progress on confinement we need to separate these two effects and study each individually. One way to do this is to

make a much larger system of quarks and gluons where the role of the vacuum at the surface of the larger system is much reduced. Such a large system can be produced by compressing or heating nuclear matter so that the neutrons and protons begin to overlap. As the boundaries between each neutron and proton disappear, a large volume of a new state of matter should be formed - the quark gluon plasma (QGP). The strong interactions between quarks and gluons dominate the properties of the QGP, and because of the larger volume of the system, the influence of the correlated vacuum is much reduced.

Collisions between two heavy nuclei take place at Relativistic Heavy Ion Collider (RHIC). Our first results from PHENIX indicate that the plasma may be formed in these reactions. Leading the evidence for the QGP is the reduced yield of particles at high transverse momenta (pt). These particles predominantly come from rare, high-momentum collisions between quarks and gluons (partons) that occur in the hot, early stage of the reaction. As high momentum partons travel through the forming plasma, they are predicted to lose a considerable fraction of their energy. Outside the collision zone high-momentum partons fragment into hadrons, and any energy-loss in the plasma softens the hadronic spectrum, i.e. lowers the measured yield of hadrons at high-pt.

Because a central reaction would produce a larger volume of QGP, this result is consistent with the 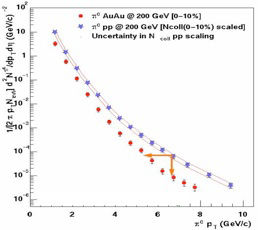 The overall caution remains that a heavy-ion reaction is a very complex, challenging environment. A strong case for the existence and properties of the QGP must rely on a broad range of observations. To extend our repertoire of probes, our group is currently analyzing data on J/psi suppression in Au+Au collisions.

Looking forward to the future, at ISU we are leading a major upgrades for PHENIX : a new Si vertex detector to quantitatively probe the early, highest energy-density phase of the matter formed in a heavy-ion reaction by measuring the yield and spectra of heavy-flavored mesons. Measuring the spectra of charm and beauty-mesons requires a tracking resolution of less than 100 mm to measure the decay of mesons displaced from the collision point.